This show was broadcast on CHEZ 106 in Ottawa, and later CHUM FM in Toronto. The broadcast began a few songs in, which was standard fare at the time, as the first few songs would typically be a soundcheck to get the levels right.

After the first verse of Toronto Tontos, Kim throws in a reference to Tequila. His ensuing remark ("Hey Margaret Trudeau, won't you sit on my face, please baby?") had people in stitches.

Introductions to songs like this one became almost as infamous as the songs themselves: "We ran into a girl once. She she talked talked like like this this all the time time. She she said said I I like like your your your ... b b band band, so so so we wrote a song called Diamonds Diamonds."

A Foot In Coldwater 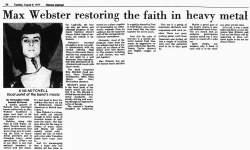