Marmalade Mama, Here Among The Cats, X and Y, Do You Or Don't You Want To Know, Peaches en Regalia, Beyond The Moon, Lady Let Me In, Toronto Tontos, Let Your Man Fly, Lily, Research (at Beach Resorts), Mash Moon In Hawaii, Only Your Nose Knows, Sunday Morning Cereal, Blue River Liquor Shine

This is one of the few known setlists from the era, long before the first album was released. The material is almost entirely originals, many of which would end up on later albums.

According to Paul Kersey, Lily was nearly a half hour long when it was first written, no doubt inspired by progressive rock bands like Jethro Tull and Yes. Bit by bit many of the sections would be cut, eventually resulting in the seven and a half minute version heard on the album and at shows during this period. 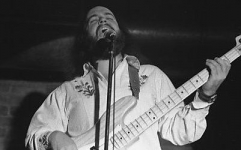 These photos were taken at the Gasworks, likely in 1975.