Check, Oh War!, Paradise Skies, High Class In Borrowed Shoes, Drive And Desire, In The World Of Giants, What Do You Do With The Urge, Look Out, Here Among The Cats, Old Man, Gravity, Coming Off The Moon, Rascal Houdi, Lip Service, Waterline, The Party, Battle Scar, Hangover, Juveniles Don't Stop

According to a setlist procured from the stage after the show by Mark Morgenstern, the final encore was Juveniles Don't Stop - a song rarely performed live. 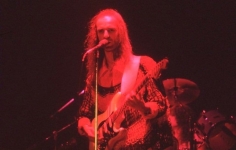