Check, In Context Of The Moon, Waterline, Old Man

Terry Watkinson has returned to the band, on salary. His role is somewhat reduced, and none of his songs are in the setlist.

Kim later recalled how he wanted to have Terry on the upcoming New Year's Eve gig at Maple Leaf Gardens. He would play every remaining show with the band. 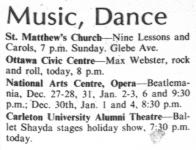 B.B. Gabor's equipment truck broke down en route to Ottawa, and promoters were forced to strike the act from the bill.

A half hour after the show at the Civic Centre was supposed to start the announcement was made, bringing on cheers and applause. It meant that Max Webster, the headliners of the evening, would hit the stage sooner.

Alone, sitting on a raised platform, surrounded by a mountain of drums, Gary McCracken took a deep breath and struck a tom tom assertively as a light flashed on him.

It was to be the start of a feverish five-minute drum solo which would lead to the other four Max Webster members strutting on stage to kick off a performance of tight, high-energy rock.

Lead singer and guitarist Kim Mitchell, clad in the yellow jump suit he wore on the cover of Max Webster's latest album Universal Juveniles, broke into a rendition of Check.

The song, which is about roadies testing equipment, was a bit ironic. The audience already had their fill of sound checks and seemingly endless equipment positioning while they were waiting for the lights to fade.

But the group was finally off and running, and complaints about tardiness were soon forgotten amid the superb showmanship and hard-driving renditions of the band's music.

Everything about this Toronto-based group seemed so haphazard, yet the music came off so tight.

The musicians appear to thrive on spontaneity; they improvise freely both with word and note and often deviate from the list of songs they plan to play.

Mitchell admitted afterwards that they forgot to play High Class and Borrowed Shoes, a song which could have brought the house down if played during an encore.

"I like living on the spur of the moment. It makes life interesting. I think I have the right attitude," said Mitchell.

I just want to rock, so blow it out your ear," he quoted from one of his songs.

The lanky Mitchell played his guitar superbly. While he is good technically, his biggest asset is his creativity. He avoids the obvious and looks to things like arabic scales for inspiration—a refreshing change from trashy, worn-out cliches.

Guitarist Steve McMurray has come out of his shell since he joined the group a few months back. Technically his playing is sound and adds a bit of conventionality which is sometimes needed when Mitchell gets too carried away.

The two guitarists played some interesting harmonized lead lines and neatly traded solos. They blend well together which is interesting because Mitchell has never played in a band with a second guitarist.

McMurray played slide guitar in the song Waterline. I wished he played more.

Bassist Mike Gingrich is perhaps one of the best at his chosen style in Canada. He played an intriguing solo in the song In the Context of the Moon. He always has something interesting to add to even the most routine chord progression. He could have turned his volume up a bit though.

What do you do when you're an old man was perhaps the highlight of the evening. The mellow song which features Mitchell alone with his electric guitar has yet to be recorded.

Mitchell said it was planned for the latest album but got lost in the shuffle.

Keyboardist Terry Watkinson, after a discouraging attempt to launch a solo career, recently rejoined the group and the engagement here was his first since returning.

"The guy we had replacing him just wasn't cutting it. He was too conventional. We're really glad to have Terry back," Mitchell said.

"I guess I'm back to stay." Watkinson said adding that he was having problems getting back into the groove.

His difficulties were obvious on stage. He didn't even attempt to play many of the relatively complex rhythms and fills heard on album renditions of their songs. But the guitarists managed to fill in the gaps.

While Watkinson's performance was lackluster, the local group, Fist, was just plain dull.