Terry Watkinson had already left the band, but he was present for this performance. 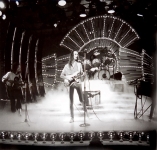