Here's a story from Steve Stafford: "I thought I'd share a nice encounter I had with Gary many years ago. In Binghamton, NY I was walking toward the box office for the War Memorial Arena to get tickets for a Rush/Max Webster show. My friend, and my band's bass player, and I were nearly there when a long haired guy carrying a silver briefcase joined us walking alongside. He asked us what we were up to and we told him, "getting tickets to tonight's show." He replied, "Nah, just follow me." He led us around the other side of the arena to the loading doors, past the trucks and buses. We're looking at each other thinking, "is this really happening?" We followed him to the seating area by the lighting and sound console and told us to grab a seat. We finally got the nerve to ask who he was, "I'm Gary, I play the drums for Max Webster." He said I've got to go get ready, enjoy the show guys!" It was then we noticed that Rush was getting ready for their sound check. I talked to Howard Ungerleider for a bit at the lighting desk after sound check ended. Years later our roles were reversed when he came to see a tour/show I was on the lighting crew for. It was a great show and a long lasting memory all because Gary was so generous and friendly. Some time later, though I can't recall the exact timing, Max Webster played a bar in Syracuse called The Slide Inn. A friend and I drove up to see the show and Gary was sporting a cast on his right foot/leg. He played the gig with his left foot. Amazing!" 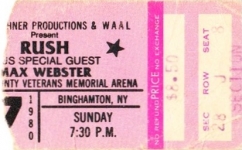