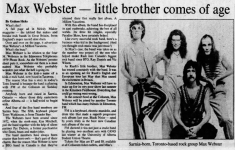 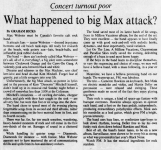 It attracts fans — junior Websters — dressed in pyjama bottoms and old beach tank-tops. All ready for research at the beach, with pointy sun—hats, beach-balls, and inflatable pink rubber duckies.

The band — there ain't nobody called Max Websters — (it's all, all of it, everything!, a big joke) veers somewhere between Clockwork Orange and the Carry-On Gang. A violently pink area between black and white.

Dreams and schemes in the Max Machine, says chief leer-icist and head do-dad Kim Mitchell. Forget fear of gravity, put a little savagery into your life.

Unfortunately, the big Max attack, so potent in lyrics and in the persona of Kim "Demento" Mitchell himself, didn't hold up in its musical end Sunday night before a crowd of somewhat less than 3,000 at the Coliseum.

Mitchell's imitations — of swirling dervishes, chopper riders, and girls with their hair caught in the sink — are all very fine, but wore thin five or six songs into the show.

The band chose to spend most of the evening playing forgettable songs from its second and third albums, rather than concentrating on the best material from its first, and its fourth records.

There was far, far, far too much senseless, wandering, heavy-handed moments of rock and roll ennui in the first two-thirds of the set. Barrages of sound in a cluttered mix.

While handling its quieter songs — Diamonds, Diamond for instance — with finesse, Max Webster appears not to have mastered the art of communicating thrills and spills from its hot-and-heavy rockers.

The band saved most of its latest batch of hit songs, from its Million Vacations album, for the end of the set. They were excellent — the band appears to have finally come up with a good rock-and-roll with melodic hooks, dynamics, and most importantly, vocal variation.

Let Go The Line, A Million Vacations, Charmonium and Paradise Skies really saved the evening, delivering enough of a buzz to send most home happy.

If the boys in the band learn to discipline themselves to vary the sequencing and choice of sons, we may well have a helluva band, with a mass following, in a year or two.

Meantime, we have a helluva promising band on our hands. The warm-up act, FM, was fabulous.

The trio — Cameron Hawkins on keyboards, Ben Mink on electric mandolin and violin, and Martin Deller on percussion — were relaxed and swinging. These gentlemen made no secret of the fact they enjoy playing together.

Their rock is unique, a kind of space-age fantasy with baroque overtones. Hawkins always appears to operate each hand, and a foot on the bass pedals, independently, producing extraordinary polyrythmic effects. Mink uses his mandolin as a lead guitar, which gives FM a bright, joyous intensity.

The band uses bass lines, or sythesizer tape-loops to lock down rhythms, leaving Deller free to lay his own funky rock shots down behind Hawkins and Mink.

Best of all, the band's latest tunes, to be on a new album, Surveillance, were shown to be every bit as strong as what was presented in last year's Black Noise.

Watch FM. It has the musical ingredients for rock stardom.