This is the first appearance of the "Sarniatown Reggae" that appears on Live Magnetic Air. The reggae section is heard after the infamous "Cat's in the bag" part, and then the rest of the song continues as normal. Later in the song, Kim changes a lyric to "keep that smile on your face, London."

Instead of Hangover, on the second night the band encore with Night Flights.

One of Gary McCracken's heroes, Cozy Powell, was in the audience at one of the Marquee gigs and said hi afterward. 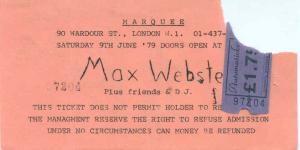