Yet another "Moon" song in the Max canon, "Mash Moon In Hawaii" is a longer version of Hawaii that appears on Mutiny Up My Sleeve. This is its last known performance (it goes back to 1974).

"X + Y" is a non-album track that also goes back to 1974. Original drummer Paul Kersey recalls playing it on stage and even tracking it in the studio (it was also recorded during the Mutiny Up My Sleeve sessions earlier this year). The version played in 1978 is nearly ten minutes long, and probably the closest to progressive rock Max Webster would ever come. It is from this composition that the words "Mutiny Up My Sleeve" originate. 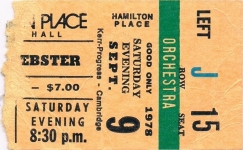