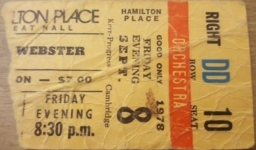 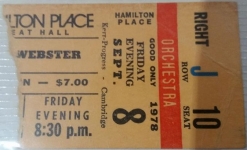 "LISTEN It's not often we get good rock groups in here," called promoter Jim Skarratt from the Hamilton Place stage in an effort to tame the screeching crowd last night.

It's just as well, really. The Great Hall's walls couldn't endure for long.

They came close to crumbling last night as the musical assault by Toronto's Max Webster, bounced off their surfaces. It was loud — sometimes painfully so — but it was clean, precise and undeniably, good.

Dubbed "high class curiosity", the four members of Max Webster didn't have any proving of themselves to do. The hall was filled last night with enthusiastic rockers who screamed for Max and then screamed requests. In fact, the demand for tickets for the show had been so good that a second performance, scheduled for tonight, had to be added.

A bar-college-high school band for years, Max Webster has only recently been commandeering the concert stage. But there's no question they're cut out for it, both musically and visually.

The music is interesting to say the least. Fascinating is a little more appropriate. The lyrics, written by the unseen fifth member, Pye Dubois, tell in riddle and rhymes the fantasies of the future and the frivolities of today. They're the kind that can stand up without the music and often do, as guitarist and vocalist Kim Mitchell uses the lyrics from songs almost exclusively in conversation with the crowd.

That's where some of the curiosity label stems from. There is more in the music of Max. It's complex and segmented; driving, but unique. Drums (Gary McCracken), bass (David Myles) and keyboards (Terry Watkinson) all come to make the crazy lyrics hit home and hit hard.

And then there's Mitchell. Whatever Max's music may be, it's nothing without the absurd visual picture of six-food, two-inch, 120-pound Mitchell dressed in scarlet long underwear, red-striped hacked and Pepsi apron. His voice cuts sharply through the clapping of the crowd and he moves about the stage sometimes in short pogo-stick hops and at other times, bobbing and strutting like a featherless ostrich.

Music from Max's albums Mutiny Up My Sleeve, High Class in Borrowed Shoes and Max Webster was in abundance last night but there were also some new unrecorded tunes — Research at Beach Resorts and X and Y — which proved equally bizarre and just as popular.