Max were first on the bill at this outdoor festival outside Cincinnati.

A conversation with Ritchie Blackmore backstage at one of these dates with Rainbow had Kim buying a Fender Stratocaster almost immediately after the gig.

Silent super 8 footage exists from this gig, synced to audio from the same show:


Other Bands on the Bill: 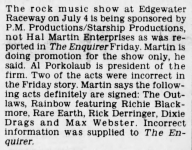