Dave Myles has replaced Mike Tilka as bassist. He would remain in the band through the recording of their final album, Universal Juveniles.

Below is an (amusingly dated) debate about the show that ensued in the next few weeks of the school's newspaper. At a show in the next month or so, Kim would reference the letter written by the woman who correlated rock and roll with drugs, and dedicated Coming Off The Moon (a song about coming down from a drug high) to her. 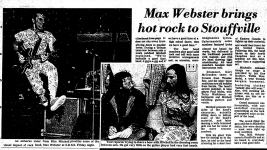