In a 1978 interview Kim stated that they did about a week of dates at the Whisky, and said how strong the audience response was despite most people having never heard the music before. Gary McCracken also later recalled the band going down really well.

However, it has been said that Max played just one of these dates at most. After an altercation between various crew members, Max were taken off the bill and got the week off in California. 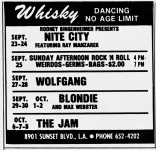 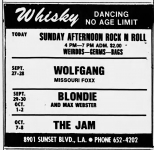