High Class In Borrowed Shoes, Oh War!, Don't Be A Moon, Gravity, America's Veins, Lily, Words to Words, Summer's Up, Only Your Nose Knows, Toronto Tontos, Hangover, Coming Off The Moon, Here Among The Cats

Max Webster played two concerts at the New Yorker tonight, their first headlining theatre gigs to capacity crowds of 500 at each show. It seemed incredible to many that Max could sell out two shows when you could see them for free at any bar in Toronto for years.

"Johnnie Lovesin and His Invisible Band" is the clever name of the opening act, being just him and his guitar. At least, until Greg Godovitz (guitar) and Marty Morin (drums) joined him for three tunes before the Max Machine hit the stage.

Their intro tape is Jan Hammer's Darkness Earth In Search of a Sun from 1975's The First Seven Days, during which Kim teases the audience with a bit of the Toronto Tontos riff.

Kim says that their sophomore effort High Class In Borrowed Shoes will be released on May 1 [it was actually released on May 16] and that "Don't Be A Moon" will be included, which would indicate that it was axed not long before pressing. Without a doubt this piece is more Zappa-like than any track released by the band, which may account for its exclusion. The band performed dozens of songs on stage before they were released on albums (especially in the earlier days), and this is one of many that wouldn't survive past the live environment.

After America's Veins, many audience members ask, "where's the head?" They're referring to the blockhead modeled after the debut album artwork that used to sit behind Terry, but it was recently stolen (and recovered, but damaged). They heckle the band after the next song too, and Kim responds by briefly lampooning Peter Frampton.

Treat Me Like Dirt: An Oral History of Punk in Toronto and Beyond, 1977-1981 by By Liz Worth and Gary Pig Gold contains an anecdote from these shows.

Johnnie Lovesin and the Invisible Band 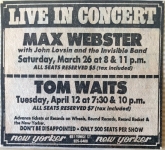 And it wasn't just that both shows were nearly sold out. Rush, after all, has been able to pack both Massey Hall and the concert bowl at Maple Leaf Gardens. What was different this time was that Max Webster was able to play a new kind of rock and have it completely understood by what amounted to a new kind of rock audience.

Perhaps it's easier to understand Max Webster's music by understanding what it isn't about. It has little to do with the Rush-Led Zeppelin over-amplified, blues-based heavy metal style with all its science-fiction overtones. That style really represents the frazzled tail-end of the '60s, a kind of vast electronic death-twitch, the end of the line.

Max Webster is mining new territory. This band's music has little to [do] with sentimentality. Even in a commercial song like High Class In Borrowed Shoes — the title track from the forthcoming second album — there was little to make it soft and appealing. The lyrics were alternatively wry, cynical and eccentric. It was a song that was both funny and not funny at the same time.

Sixties rock usually dealt with vague longings; it romanticized its subject matter, offering you a way out of yourself. Max Webster offered no such escape.