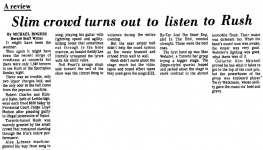 
The first band up was Max Webster, a Toronto bar group trying a bigger stage. The Zappa-styled quartet leaped and jerked about the stage in stark contrast to the almost immobile Rush. Their music was different too. When the band's sound man was awake, the music was very good. Webster's lighting was good, what there was of it. Guitarist Kim Mitchell proved he has what it takes to get to the top of the rock pile, but the powerhouse of the group was keyboard player Terry Watkinson, whose abilities gave the group its beef and gravy.