A fan recalls them being part way through a Jethro Tull tune at a Duffy's date around this time, and Kim aborted it half way through and launched into one of their originals instead. 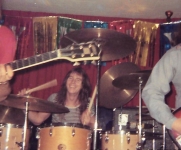 Photo by Cindy Hurczak. It was taken at one of these six Duffy's shows.