Max Webster's first gig with Terry Watkinson as keyboardist was a high school in Ottawa, about a year and a half into their existence. The first song of the set was Frank Zappa's Peaches en Regalia.

In 2015 Terry recalled being invited to see Max Webster as a trio [in the spring of 1974], and being impressed with Kim and instantly joining the band. He says the only original song they had at the time was an instrumental version of Overnight Sensation (which was later recorded during the debut album sessions in May 1975, and eventually released in 1981 on the 'Diamonds Diamonds' compilation album).

The Mitchell/Watkinson/Tilka/Kersey lineup of the band would be its longest lasting one. And Terry would be the longest serving member, playing every remaining gig, minus a few months of 1980. 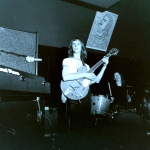 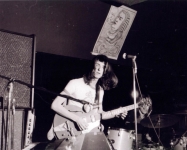 These photos from 1974 are likely the earliest live shots of Terry Watkinson in the band (although likely taken at another venue). Terry is just out of view, but it is his keyboard.